President Trump signed America’s Water Infrastructure Act of 2018 into law on October 23, 2018. Sections 3003 and 3004 of the Act required FERC to issue rules establishing expedited processes for issuing and amending licenses for qualifying facilities at existing non-powered dams and for closed-loop pumped storage projects. The processes must seek to ensure a final decision by the Commission on an application for a license by no later than two years after receipt of a completed application.

These sections also required the Commission to convene an interagency task force (ITF) to coordinate the regulatory processes associated with the authorizations required in connection with the new processes.

May 31, 2017 FERC Staff Sends to Congress Report and Recommendations on the Two-Year Hydro Pilot Process Report 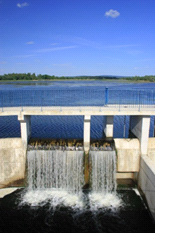 On August 9, 2013, President Obama signed into law the "Hydropower Regulatory Efficiency Act of 2013". The Act, among other things:

(1) exempted certain conduit hydropower facilities from the licensing requirements of the Federal Power Act (FPA);
(2) amended Section 405 of the Public Utility Regulatory Policies Act of 1978 to define "small hydroelectric power projects" as having an installed capacity that does not exceed 10,000 kilowatts;
(3) authorized the Commission to extend the term of preliminary permits once for not more than 2 additional years beyond the 3 years previously allowed under Section 5 of the FPA; and
(4) directed the Commission to investigate the feasibility of a 2-year licensing process for hydropower development at non-powered dams and closed-loop pump storage projects.

Please follow the links below for guidance on how to file a notice of intent to construct a qualifying conduit facility, an application for a small hydropower exemption, and an application to amend a preliminary permit term.

Commission Issues Final Rule - On July 23, 2003, the Commission issued a Final Rule to revise its regulations pertaining to hydroelectric licensing under the Federal Power Act. Effective October 23, 2003, the revisions would create a new licensing process, the Integrated Licensing Process (ILP) in which a potential license applicant's pre-filing consultation and the Commission's scoping pursuant to the National Environmental Policy Act (NEPA) would be conducted concurrently, rather than sequentially. The Final Rule was published in the Federal Register on August 25, 2003. Highlights of the proposed new licensing process include:

The ILP joins the Commission's two existing processes, the Traditional Licensing Process (TLP) and the Alternative Licensing Process (ALP), as a third alternative for processing hydroelectric license applications (table comparing the three processes). The Final Rule also established a two-year-transition-period whereby an applicant may choose among the three processes until July 2005. On July 23, 2005, the ILP would became the default process. Commission approval is now needed to use the TLP and ALP.

The regulatory language for the ILP is included in a new part 5 of Title 18 of the Code of Federal Regulations. The Final Rule also includes changes to the TLP and ALP regarding application requirements, public participation, and a Pre-application document. The 18 CFR parts 2, 4, 16, and 385 is amended to implement the new procedures. A redline/strikeout version of the changes to 18 CFR parts 2, 4, 9, 16, 375, and 385 and the new part 5 regulation text is available.

In drafting language for the Final Rule, Commission staff considered written comments filed in response to the February 20, 2003 Notice of Proposed Rulemaking comments received at public and tribal workshops, conceptual language from the Stakeholder Drafting Sessions, and language drafted jointly with other federal agencies with authorities under the Federal Power Act (Departments of Commerce, Agriculture, and the Interior.)

In the Winter of 1998, the FERC and the following agencies formed an Interagency Task Force to Improve Hydroelectric Licensing Processes:

On May 22, 2000, FERC's Chairman and the Secretaries of the Interior, Commerce, and Agriculture signed a statement of commitment to make the hydropower licensing process more efficient and effective. In 2001, the ITF completed its tasks and the results were reported to Congress by letter dated January 10, 2001.