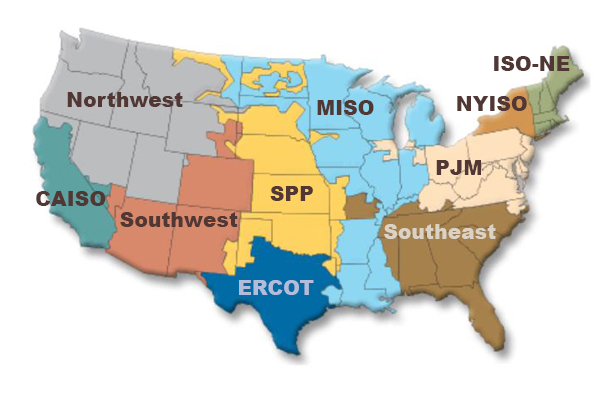 Traditional wholesale electricity markets exist primarily in the Southeast, Southwest and Northwest where utilities are responsible for system operations and management, and, typically, for providing power to retail consumers. Utilities in these markets are frequently vertically integrated – they own the generation, transmission and distribution systems used to serve electricity consumers. They may also include federal systems, such as the Bonneville Power Administration, the Tennessee Valley Authority and the Western Area Power Administration. Wholesale physical power trade typically occurs through bilateral transactions, and while the industry had historically traded electricity through bilateral transactions and power pool agreements, Order No. 888 promoted the concept of independent system operators (ISOs).

Along with facilitating open-access to transmission, ISOs operate the transmission system independently of, and foster competition for electricity generation among, wholesale market participants. Several groups of transmission owners formed ISOs, some from existing power pools. In Order No. 2000, the Commission encouraged utilities to join regional transmission organizations (RTOs) which, like an ISO, would operate the transmission systems and develop innovative procedures to manage transmission equitably. Each of the ISOs and RTOs have energy and ancillary services markets in which buyers and sellers could bid for or offer generation. The ISOs and RTOs use bid-based markets to determine economic dispatch. While major sections of the country operate under more traditional market structures, two-thirds of the nation’s electricity load is served in RTO regions.

The California Independent System Operator (CAISO) operates a competitive wholesale electricity market and manages the reliability of its transmission grid. CAISO provides open access to the transmission and performs long-term planning. In managing the grid, CAISO centrally dispatches generation and coordinates the movement of wholesale electricity in California and a portion of Nevada. CAISOs markets include energy (day-ahead and real-time), ancillary services, and congestion revenue rights. CAISO also operates an Energy Imbalance Market (EIM), which currently includes CAISO and other balancing authority areas in the western United States.

CAISO was founded in 1998 and became a fully functioning ISO in 2008. The Energy Imbalance Market launched in 2014 with PacifiCorp as the first member or EIM Entity. The EIM serves parts of Arizona, Oregon, Nevada, Washington, California, Utah, Wyoming and Idaho.

MISO operates the transmission system and a centrally dispatched market in portions of 15 states in the Midwest and the South, extending from Michigan and Indiana to Montana and from the Canadian border to the southern extremes of Louisiana and Mississippi. The system is operated from three control centers: Carmel, Indiana; Eagan, Minnesota; and Little Rock, Arkansas. MISO also serves as the reliability coordinator for additional systems outside of its market area, primarily to the north and northwest of the market footprint.

MISO was not a power pool before organizing as an ISO in December 2001. It began market operations in April 2005. In January 2009, MISO started operating an ancillary services market and combined its 24 separate balancing areas into a single balancing area. In 2013, the RTO began operations in the MISO South region, including the utility footprints of Entergy, Cleco, and South Mississippi Electric Power Association, among others, in parts of Arkansas, Mississippi, Louisiana, and Texas.

As the RTO for New England, ISO-NE is responsible for operating wholesale power markets that trade electricity, capacity, transmission congestion contracts and related products, in addition to administering auctions for the sale of capacity. ISO-NE operates New England’s high-voltage transmission network and performs long-term planning for the New England system. ISO-NE serves six New England states: Connecticut, Maine, Massachusetts, New Hampshire, Rhode Island and Vermont. New England’s all-time peak load was 28 GW in summer 2006. ISO-NE is interconnected with the New York Independent System Operator (NYISO), TransEnergie (Québec) and the New Brunswick System Operator. ISO-NE imports around 17 percent of its annual energy needs from Québec, NYISO, and New Brunswick. In ISO-NE’s annual Forward Capacity Auction (FCA), both generator and demand resources offer capacity three years in advance of the period for which capacity will be supplied. The three-year lead time is intended to encourage participation by new resources and allow the market to adapt to resources leaving the market. ISO-NE relies primarily on natural gas-fired and nuclear generation, accounting for 49% and 31% of the systems supply in 2016, respectively.

The creation of the New York Independent System Operator (NYISO) was authorized by FERC in 1998 and launched on Dec. 1, 1999. The NYISO footprint covers the entire state of New York. NYISO is responsible for operating wholesale power markets that trade electricity, capacity, transmission congestion contracts, and related products, in addition to administering auctions for the sale of capacity. NYISO operates New York’s high-voltage transmission network and performs long-term planning.

The NWPP is composed of all or major portions of the states of Washington, Oregon, Idaho, Wyoming, Montana, Nevada and Utah, a small portion of Northern California and the Canadian provinces of British Columbia and Alberta. This vast area covers 1.2 million square miles. It is made up of 20 BAs. The peak demand is 54.5 GW in summer and 63 GW in winter. There are 80 GW of generation capacity, including 43 GW of hydroelectric generation.

The PJM Interconnection operates a competitive wholesale electricity market and manages the reliability of its transmission grid. PJM provides open access to the transmission and performs long-term planning. In managing the grid, PJM centrally dispatches generation and coordinates the movement of wholesale electricity in all or part of 13 states (Delaware, Illinois, Indiana, Kentucky, Maryland, Michigan, New Jersey, North Carolina, Ohio, Pennsylvania, Tennessee, Virginia and West Virginia) and the District of Columbia. PJM’s markets include energy (day-ahead and real-time), capacity and ancillary services.

PJM was founded in 1927 as a power pool of three utilities serving customers in Pennsylvania and New Jersey. In 1956, with the addition of two Maryland utilities, it became the Pennsylvania-New Jersey-Maryland Interconnection, or PJM. PJM became a fully functioning ISO in 1996 and, in 1997, it introduced markets with bid-based pricing and locational market pricing (LMP). PJM was designated an RTO in 2001.

The Southeast electricity market is a bilateral market that includes all or parts of Florida, Georgia, Alabama, Mississippi, North Carolina, South Carolina, Missouri and Tennessee. It encompasses all or part of two NERC regions: the Florida Reliability Coordinating Council (FRCC) and the Southeastern Electric Reliability Council (SERC). Utilities in the Southeast are vertically integrated and virtually all the physical sales in the Southeast are done bilaterally. Within the Southeast, the resource mix varies between the NERC subregions. The FRCC relies primarily on natural gas, while the rest of the Southeast has historically primarily utilized coal and nuclear plants. However, natural gas electricity has become more economic in recent years for generation and continued to gain an increasing share of the fuel usage.

The Florida Public Service Commission’s (PSC) competitive bidding rules require investor-owned utilities (IOUs) to issue requests for proposals for any new generating project of 75 MW or greater, exclusive of single-cycle combustion-turbines. The bidding requirement can be waived by the PSC if the IOU can demonstrate that it is not in the best interests of its ratepayers.

The Southwest relies on nuclear and coal generators for baseload electricity, with gas units generally used as peaking resources. The coal generators are generally located in close proximity to coal mines, resulting in low delivered fuel costs. Some generation is jointly owned among multiple nearby utilities, including the Palo Verde nuclear plant, a plant with three units totaling approximately 4,000 MW, which has owners in California and the Southwest.

The Electric Reliability Council of Texas (ERCOT) serves as an independent system operator, managing the flow of electrical power to 24 million customers in the state of Texas, representing approximately 90 percent of Texas’ electrical load. ERCOT operates a competitive wholesale electricity market, ensuring reliability over more than 46,000 miles of transmission lines, for approximately 550 generating units and for its customers in Texas. Operating as an energy-only market with real-time, day-ahead, and ancillary service markets, ERCOT also performs financial settlement for the competitive wholesale bulk-power market and administers retail switching for 7 million premises in competitive choice areas. Governed by a sixteen member board of directors, subject to oversight from the Public Utility Commission of Texas and the Texas legislator, its members include consumers, cooperatives, generators, power marketers, retail electric providers, investor-owned electric utilities (transmission and distribution providers) and municipal-owned electric utilities.