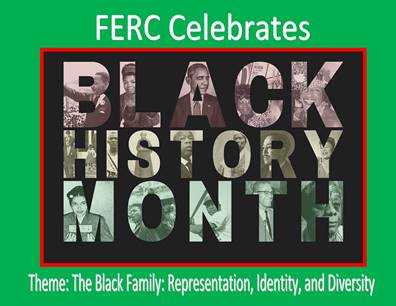 “Race Matters: America in Crisis,” is a documentary that focuses on the frustration surrounding race within our country. This PBS special shines a light on the deep systemic racial disparities in education, the criminal justice system, the economy and health care during the COVID-19 pandemic. “Race Matters” explores the minds of grassroot activists, and provides insight through roundtable discussions with thought provoking leaders, newsmakers and social science experts from around the country. The “Race Matters” documentary was selected by the AAERG because no matter your race, political party, or identity, these events are impossible to escape and cannot be ignored.

Please join them for this thought provoking “Lunch and Learn.” The meeting will open at 11:45am and the video will begin promptly at 12:00pm. 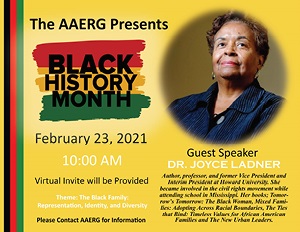 DR. JOYCE LADNER will be this year’s BHM guest speaker. She is an author, professor, and former Vice President and Interim President at Howard University. She became involved in the civil rights movement while in school in Mississippi. Her books are “Tomorrow’s Tomorrow: The Black Woman, Mixed Families: Adopting Across Racial Boundaries, The Ties that Bind: Timeless Values for African American Families and The New Urban Leaders.  Her background is most relevant in today’s tumultuous times.

AFRICAN AMERICAN FACTS: DID YOU KNOW?

American politician and civil rights advocate who served in the United States House of Representatives for Maryland's 7th congressional district from 1996 until his death in 2019. Cummings served in the Maryland House of Delegates from 1983 to 1996. The district he represented included just over half of the city of Baltimore, most of the majority-black precincts of Baltimore County, as well as most of Howard County. He will be remembered as a dedicated public servant who was a fearless leader and a fighter for justice.

On July 17, 2020, the legendary civil rights leader John Lewis died at the age of

80. His legacy of getting into "good trouble" to oppose system racism is still alive today and will live for years to come.  Mr. Lewis dedicated his life to protecting and advancing the rights of Black people in the United States.

"Nothing can stop the power of a committed and determined people to make a difference in our society. Why? Because human beings are the most dynamic link to the divine on this planet." – John Lewis

"The moment anyone tries to demean or degrade you in any way, you have to know how great you are. Nobody would bother to beat you down if you were not a threat." – Cicely Tyson

"LIFT EVERY VOICE AND SING"

Lift ev'ry voice and sing, 'til earth and heaven ring,

Ring with the harmonies of liberty; let our rejoicing rise

High as the list'ning skies,

Let it resound loud as the rolling sea.

Let us march on 'til victory is won. Stony the road we trod, bitter the chastening rod,

Felt in the days when hope unborn had died; yet with a steady beat,

Have not our weary feet

Come to the place for which our fathers sighed?

We have come over a way that with tears has been watered,

We have come, treading our path through the blood of the slaughtered,

Out from the gloomy past,

'Til now we stand at last

Where the white gleam of our bright star is cast. God of our weary years,

God of our silent tears,

Led us into the light,

Keep us forever in the path, we pray.

Lest our feet stray from the places, our god, where we met thee, lest, our hearts drunk with the wine of the world, we forget thee; shadowed beneath thy hand,

May we forever stand, true to our god,

True to our native land.

Written as poem and put to music by his brother John Rosamond Johnson. First performance by 500 school children in their hometown of Jacksonville, FL to Celebrate Abraham Lincoln's Birthday